on the needles and dreaming

There’s that bit of anticipation in the air — even for those of us without school-age kids at home (mine’s turning THIRTY this weekend!), you can feel the vibe. Something’s about to pop.

Whether you’re packing up the old jalopy and headed out on the road soon, or you wish you were and you’re catching the end-of-school-year buzz, it’s always good to have a delicious little project to work on or look forward to. Little portable, one-skein nibbles that you can take with you, even if it’s just out on the back porch with a refreshing beverage.

I’ve got two on the radar that are making my needles twitch — and when Tina was up visiting me for her colossally-sunny birthday weekend, I could resist no more and had to Cast.On.Now: a Pinking Shears Scarf with a delicious single skein of Socks that Rock™ in “Autumn’s Up.” 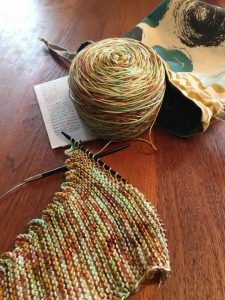 With Socks that Rock, I upped the needle size to a US7/4.5mm. Fun thing about this pattern is, you start at the point and work your way toward the middle – so your beginning can be like your swatch! And after a few inches or so, you’ve got enough fabric to gauge whether or not you like that needle size – and it’s not too too painful to rip out. (Pro tip: don’t rip out your first attempt – save it for comparison. Take the other end of the ball and start with the next needle size you want to try; work for a few inches and then compare the two. Bonus: it’s not as painful to rip out the one you don’t like when you’ve got the new and better one started already!) (Or maybe I’m just good at rationalizing?)

If you have two skeins of the same colorway, lucky you! You can make a lovely large Pinking Shears Scarf. If you’ve got just the one skein, be sure to WEIGH your skein on a kitchen/gram scale before you start and note down the full skein weight, because you’ll want to stop when you’ve used up a little less than half your skein. This scarf differs from Hitchhiker in that you knit two identical pieces and graft it in the center for a triangular shape that’s skinny at both ends and thick in the middle.

Once you’ve knitted a few inches on this thing, it’s super-intuitive — and the Churchmouse design team have left notes in the pattern about how to use a stitch marker to help you remember which row you’re on, which is helpful when the sun goes over the yardarm and the adult beverages come out!

But maybe ‘vacation’ for you means some free space and free brain time and you want a project you can really dive into, with a little chart perhaps? Like a big, fat novel with lots of characters to get to know, lace or charted knitting gives your brain a little world to explore, and the hours can just zoom by as you’re in that ‘flow’ state.

My favorite new pattern this week on Ravelry for just such an occasion would be Martina Behm’s Green Light Shawl: 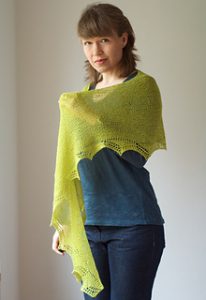 As she says on the Ravelry pattern page, Green Light is “a nice project to start at home and take on vacation: Work on the mindless and relaxing garter stitch part while still at home and working, and save the slightly more complicated lace part for when you have arrived at your destination, are relaxed and have lots of time to knit the lace border in your deck chair.” Boy, has she tapped into the Zeitgeist of early summer or what?

I am literally chomping at the bit to get one of these on the needles in Silky Laci. When I was working on Let the Light In last spring, Silky Laci was new and I only got to swatch it — the luster and sheen that the silk adds to the merino is really out of this world. It’s begging to be shown off in something as elegantly simple as Green Light. And I just happen to have a skein in “Golly” that would be dead-elegant over my coat come Fall! (Which is probably when I’d have it finished to wear, given the major case of cast-on-itis I’ve got right now.) At an astounding 900 yards per skein, Silky Laci is a no-brainer for this shawl — wind it up, pop some needles in a cute project bag, and you’re set for some great knitting, wherever your final vacation destination may take you.

Now if anyone needs me, I’ll be out on the back deck with one of those refreshing beverages…