Today we have nothing but the freshest inspiration for you … so fresh, it’s only just been released! 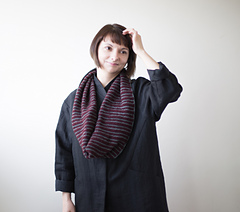 From the fertile, textured brain of Olga Buraya-Kefelian, aka Olgajazzy, comes JUKO (Japanese for fluted or grooved), a single- or two-color double-brioche cowl in two sizes.

Double brioche, you say – what’s that? If you’ve tackled brioche before, you’re familiar with the glorious depths of its 1×1 ribbing – somehow more elastic and deep than traditional rib, thanks to the doubled strands formed by either knitting into the row below or yarn-overing as you slip stitches. And as deep and squooshy as it is in a single color, in two colors it’s downright magical. Double brioche extends the ribbing into 2×2 territory, with 2 knits next to 2 purls and some slipped and some worked and my, what fun!

Since I follow Olga on Instagram (a highly entertaining thing to do – some of her close-up shots of her textured work look like sea creatures, or wild architecture, or moonscapes!), I saw this cowl flash by with the magical words “Pattern now available on Ravelry!” and faster than you can say “where’s my coffee?” I had purchased, downloaded, printed and grabbed needles and yarn to cast on.

As luck would have it, I had Tina nearby (on a slumber-party stayover after her teaching gig at Lorilee’s “Knitting on a Lark” retreat at Islandwood), and she approved of my yarn choice: La Luna DK. We both thought the combination of silk and high-micron merino would be sheer indulgence around the neck, and would drape lustrously at the recommended pattern gauge. 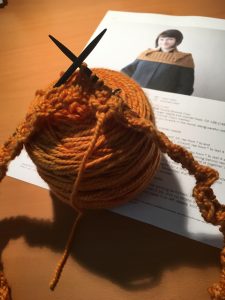 Boy, were we right! I love the happy marriage of merino and silk; the silk provides all the luster and drape and amazing sleek finger-feel we knitters crave, and the merino provides the bounce and memory the silk needs to hold its shape. Plus, I gotta say, this is one of my absolute favorite yarns to have around my neck. EVER.

At 220 yards per skein, you’ve got the right amount of yardage to put together either a single-color or two-color cowl with two skeins of La Luna DK without a ton left over. Or go ahead and make it just a wee bit deeper to use up all your yarn – you won’t regret having that little bit of extra fabric to snuggle up in!

Olga’s been fantastically clever in working out the stitch pattern here – there’s a little adjustment at the end of the rounds to minimize any pattern jog between rounds, as well as proper attention paid to the cast-on and bind-off rounds for a professional finish (so important in so sleek a thing as a cowl).

I love how the 2-round pattern repeat magically combines both the yarn-over-and-slip method and the work-into-the-row-below method of brioche – essentially marrying the two schools of brioche into one cool rhythm! Work up a JUKO and you’ll be well-versed in both methods, so you’ll be free to brioche away on any designer’s pattern to your heart’s content. Learning and fun in the same pattern – that’s what I call inspirational!

FYI, if you’re an auditory learner like me, you’ll find yourself chanting a little four-step mantra as you work the 2×2 rib in this pattern. My Round 2 mantra goes: “below, purl, knit, slip” and Round 3 goes: “purl, slip, below, knit.” Curious? Go buy the pattern and try it out!

A soothing rhythm, a cool new technique, a chance to cast on and play with lustrous, sumptuous yarn – this one’s a total no-brainer. Sock away a couple in the gift drawer for the holidays and your December self will thank you later. (Make several so you can bear to give a few away.)

If anyone needs me, I’ll be downstairs on the couch, chanting. Below, purl, knit slip…

I’ll leave you with a quote from Maya Angelou, very appropriate for the design of our friend Olga:

“You can’t use up creativity. The more you use, the more you have.” – Maya Angelou

Thank you, Olga, for this week’s inspiration!