This is a love song to a colorway… specifically, Heckley Speckley.

(I’ll be over here if you just want to stare at it for a while. Can’t blame ya.)

I mean, really. That olive-y subtone; those blues-going-to-purples on the end there? The rust-ish speckles? Happy yellow? This colorway has Got.It.All.Goin’.On.

So of course it’s caught the eye of some talented knitters and designers out there… including most recently Miss Joji herself! 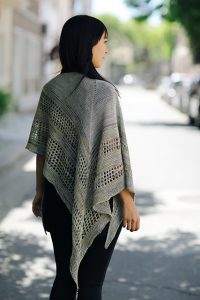 Tina’s already mentioned Tracie the pattern (and her huge affection for Tracie the person) – so can I just wax rhapsodic about the notion of Heckley Speckley as one of the colors in here?

Joji’s chosen to wash this gorgeous shawl in grey tones, playing on the more subdued elements in Heckley Speckley, but I can just as easily imagine this shawl with a rich blue as the other color, or a deep grey, or even a scummy green!

One skein each of Heckley Speckley and your choice of secondary shaded solid in Socks that Rock® Lightweight, and you’re off to the races with weeks’ worth of glorious knitting fun! (If you’re feeling particularly unselfish, you could plan to knit this as a special gift for a friend – got someone with a special birthday coming up in the early part of next year? Shawls are a great choice, since they are one-size-drapes-beautifully-on-all!)

Or let’s say you’ve got a busy set of weeks coming up, with lots of travel and family time, and you can’t dedicate a lot of concentration time to a shawl pattern. What if you just want some “in-law knitting?” The kind where you just knit around and around, no thought required. The kind that allows you to be attentive enough to your Uncle Vernon and his story about the neighbor’s old Ford Pickup truck and the mule (for the hundredth time). The kind that lets you nod and then laugh in all the right places…

Alexandra’s Airplane Scarf is just the ticket for these family-heavy coming weeks. Developed for easy knitting on long airplane flights, it’s a simple-yet-stunning tube of a scarf that lets the yarn really sing. I knitted one last year in SilkMo in Heckley Speckley and it was my stand-out accessory all through the colder winter months! This fluffy bit of loveliness went with pretty much every single coat I own – and everywhere I went, I had to whip it off because people wanted to see all the colors! 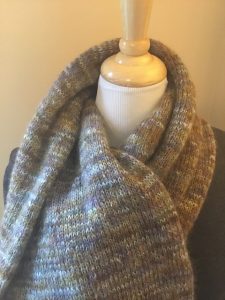 I love how the mohair blurs the colors in Heckley Speckley – it’s a more muted version that still sings.

Best of all, right now Tina’s offering SilkMo with double the yardage! For a limited time, instead of getting the usual-size skein, Tina and the Barn Girls will dye a double-sized 1452 yd / 8 oz skein for you!  Considering that you can knit yourself an ‘Alexandra’s’ for around 800 yards, that means if you divide the skein in half, you get to cast on and knit and knit and knit and knit, round and round without a care in the world, until you have just enough yarn left to bind off. (The pattern lets you know how much that is, too. So considerate, those Churchmouse folks.) Then you’ll have one to give away (generous you) AND one to keep for yourself – all for just US$32!