Why lots are important.

Okay before we go into why lots are important. I have taken the colorways down I told you I would and put up some of our favorites. A few of these have not been up on the website for awhile. I’m pretty excited to see them.

So as I said in the last post we are having a contest of sorts. The first person that can list all of the colorways I just added wins a Rare Gem skein. You can email your guess to us at info@bluemoonfiberarts.com .

Please put “Colorway Contest” in the subject line of your email. Thanks!

We all know about dye lots and how important it is to order or purchase enough yarn for your project in the same lot, especially if you are knitting a garment. Well my knitting friends the same is true for yarn lots and here is why.

One LOT of yarn is basically 1 MILL RUN of that yarn. ONE MILL RUN LOT would be made from all the same wool/top and then spun at the same time and plied then also to the specs of that yarn.  Most mills will keep the singles and then ply the yarn as needed. Each time that happens it should be marked as a different lot since the ply could be different. You would think that it would not be different enough to matter but in fact it is. ( Ask me how I know?)

I will never, ever forget when my second big order of Socks that Rock walked in the door. I opened the box, pulled out the skeins buried my face in them and then gave them a squeeze. And to my surprise they felt a little different. The yarn was a little softer than the last shipment we had. I was like okay let’s see what it dyes like. It pretty much dyed the same but it was most definitely the tiniest bit softer with a fraction ( and I mean a fraction) less boing to it. I might have freaked out a wee bit. I called my supplier and told them they had it all wrong and what did they do and so on and so forth.

It was then that I got schooled on different LOTS and how wool is a living growing thing. While we do as much as we can to recreate a yarn to the specs we have for that yarn there is going to be some variation. It might be a variation that most are not going to notice but sometimes it can be a bit more. Which is why each new lot is tested when it walks in our door so we know what we are working with.

As most of you know we recently ran a super Special on our BFL Sport since it was being discontinued. We put a special pricing on it and also decided to a do a KAL with one of our favorite patterns. Midway through dyeing massive amounts of BFL we discovered that we were sent 2 differing lots that were not marked as such. yeah…

Now, the difference between the two was not great. And…unfortunately it was not a difference we could see before it was dyed. If we had an order with 1 skein of each of three differing colors you would not notice either. We had a lots of those orders because that was what the KAL called for. It was when we had a garments worth of the same color that the difference was visible. Say there were 5 skeins all dyed in one color. You could see that 3 were from one lot and 2 were from the other. Now let’s take a moment and think about that and what it might mean production wise on a yarn that was already discounted and we had a ton of orders for. Yeah…I might have shed a tear or two.  So… we took a minute to regroup and problem solve.

The difference was one lot was tighter plied than the other. The end gauge was the same so that was not an issue. Phew!!! The issue was that the color looked just a bit different. Which for sweater knitting is a problem. So we could not ship those out to you. 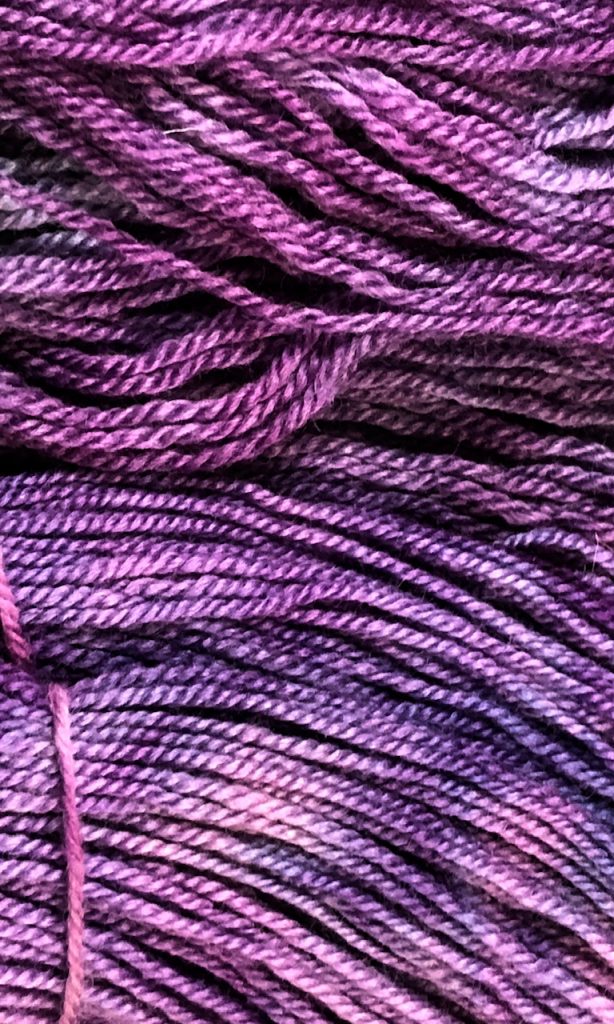 (You see the difference both in the ply and the color yes?)

What we discovered was if we soaked the yarn, spun it out and then dried it we could see the difference between the lots before dyeing!!! Yay Kalia for coming up with that plan. While we were thrilled to have a plan it did add a whole other step to the process slowing everything down. Adding more labor also adds more cost. Adding another step that delays all orders not just the BFL also adds more customer service for us.

Why am I sharing this with you? I am not sharing to complain. Although, in all honest after the year we have had I did having my whining moment or two with a good friend and a bottle of wine. I have been in this industry for at least 20 years and know these things happen. I will say it does seem to be happening more and more lately. Also, if you run a small business you know that this kind of problem-solving rolling with the punches is just how things can go. Dyers are often the last process/person before it goes to your local yarn store and/or into your hands. Something that is interesting to consider in relationship to the end product and the controls we have.

I am sharing all this with you so we all have a better understanding of what goes into the making and dyeing of the yarn that we create with. There are many steps and people involved from shepherd to yarn store owner. I think it is important to know exactly what goes into what we are working with. When we pick up a skein of yarn off a shelf we are not really considering all that goes into bringing that skein to us.